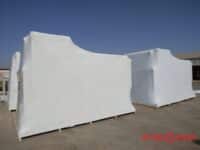 Heat shrink wrap, also known as heat shrink film, is one of the most popular shrink packaging materials used in the world. As the name suggests, the packaging material shrinks around the product when exposed to heat and provides a layer of protection during transit and storage.

Made of polymer plastic film, heat shrink wrap is available in a variety of thicknesses, clarities, strengths and shrink- ratios. Each type can be used as standalone packing material or in combination with another heat shrink wrap material type to create the required layering and protection for the product.

Heat shrink wraps are being widely used for the following:

The three main types of films used in heat shrink wrapping are polyvinyl chloride (PVC), polyolefin (POF) and polyethylene (PE). They come with their fair share of shortcomings such as:

Resembling a dog’s ear, these are the triangular protrusions of the film on the corners of a package. They occur due to insufficient shrinkage of the film, causing the corners to not shrink enough. It can be avoided by applying more heat to the shrink film or by using high-quality films.

Heat shrink wrap ballooning happens when the shrink film is exposed to hot air after sealing. The air inside the wrap expands and causes the film to balloon. This can be solved by using film with vent holes, also known as a pre-perforated film, which allows air to escape as the film shrinks around the product.

Burn holes occur when too much heat is applied to the shrink film. It can be easily avoided by ensuring that the film is exposed to the right temperature while sealing.

Fish eyes are round or oval patterns that arise in the plastic due to insufficient shrinking caused by a lack of heat or bad air velocity. Proper maintenance of the heating element can solve this problem.

Tears in heat shrink film are often caused by the type of shrink film or the thickness of the film being used. Switching to a different kind of film would fix this heat shrink wrapping problem.

Heat shrink wrapping is an easy way to ensure your products are safe. It offers many types of flexible packaging film options to ensure complete protection of your product. Be it robustness or recyclability and sustainability, there is a heat shrink film to match every business needs.